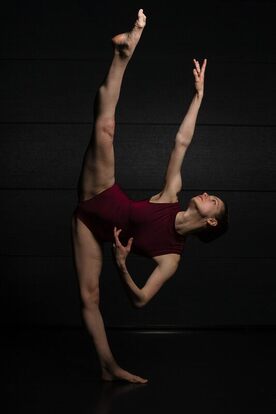 Originally from Champaign, Illinois, Erica Johnston was always fascinated by the art of the imagination.  While pursuing her studies as a young dancer, she began selling decorated pointe shoes under the business name Pointe Creations in 2004.  After hitting a growth spurt in her early teens, she was unable to find leotards that fit her long torso properly, and her leotard making endeavor began.  She trained in the arts of design and costume construction under Deanna Doty, Kathleen Egan, Karl Kaufman, and Mark Eric.

Erica's dancing life has taken her from coast to coast.  She has trained with the Champaign Urbana Ballet, the Joffrey Ballet of Chicago, Alonzo King's LINES, Paul Taylor's American Modern Dance, and Butler Ballet.  She graduated from Butler University with a BFA in Dance Performance and now freelances in and around New York, NY.  She is a current guest artist with the Champaign Urbana Ballet, a previous performer with the Victory Dance Project, and a collaborator with several independent choreographers, including Christopher Jackson (AAADT), Jude Evans (Ballet Arts at City Center) and Allyson Ross (Southern Belle Stories).  She is also a guest instructor at the Ailey Extension and the Champaign Ballet Academy, teaching ballet, modern, and contemporary dance.
​
During lockdown in 2020, Erica worked with composer Nevada Lozano and pianist Wesley Ducote to produce an album of original music for ballet class and an accompanying pedagogical guide for teaching introductory music theory to dancers; you can find out more about this project here.  "Music for Ballet Class" is available to stream on Spotify, Pandora, Apple Music, and YouTube.
Erica is also the original pattern maker and builder for Illuminate Dancewear, a Chicago-based dance apparel brand founded by Carrie Patterson that partners with various nonprofit organizations.  Check out more about Illuminate Dancewear here!